Today I had a good breakfast and then attended mass at the main Catholic Cathedral St. Petrus in Osnabrück. It is a magnificent church. I got some odd looks since I went in my sport coat and not in a heavy winter coat. I will make sure not to make that mistake again since thinking back on it I probably looked like I was going to church dressed like it was early summer.

This morning only after a few hours of sleep I met up with Derick, his girlfriend and another friend from the Netherlands. We drove over to Bad Iburg to meet with some other co-workers at a really cool restaurant called the Waldwirtschaft-Malepartus out in the woods with an amazing view of the countryside. After a nice lunch we went back into town and toured the castle. The castle was incredible and had multiple churches since it was the seat of the Bishop for a long time. I am looking forward to learning German so that Katie and I can go again (this time knowing German so that I know what the tour guide is saying). Luckily I had a coworker help translate.

Tonight was the Chassis Systems Business Unit Christmas party. We met at the Bahnhof (main train station) and started with some Glühwein to stay warm. After a short walk in the rain we made it to the main event avenue, the Portugese club here in Osnabrück. It was a lot of fun with good food and plenty of beer. It was a good chance to meet others in the group that I had not met yet. After the party almost the entire group moved over to a bar down the street. This was at about 1:00 am already. After hanging out there for an hour we moved to Club Alando. Very cool place with tons of different rooms and DJ’s. After dancing for a couple of hours I made my way back to the hotel exhausted and ready for bed.

This week was more training at work and a couple of visits to the Weinachtsmarkt. It snowed a good bit and was pretty cold but at least the snow made everything look pretty. The food at the work canteen is still delicious and I am starting to get the hang of how everything works. Just need to master the language now. Walks daily after lunch made it nice to get outside and enjoy the fresh air.

Visited a German Mexican restaurant and I think it will be good enough to hold us over while we are living here. Interesting eating a taco with a knife and fork. Tried it with an Alster which is a close to non-alcoholic drink that is comprised of Pilsner beer and lemon soda (short for Alsterwasser). The Germans are very strict about drinking and driving.

Today I visited Philip’s parents in Bad Iburg with Philip and his girlfriend. The town of Bad Iburg is beatiful with an old castle near the city center. Philip’s parents were very nice and even had a Nikolaus present for me! Nikoluas day is on the 6th of December and is for children to get a treat from St. Nikolaus (Santa). Children will clean their boots and put them outside of their door. If they are good Nikolaus will give them candy but if they were naughty they will only receive sticks.

The visit comprised of coffee, delicious homemade holiday cookies and even homemade stollen. After the visit we dropped off Philip’s girlfriend so she could return home via carpool. We went back to Philip’s flat and ordered pizza and watched Tatort (a long standing crime investigation TV show here in Germany). It was actually really good and luckily I had Philip to fill me in when I didn’t understand what was going on. It is a two part show so I will need to watch the other part next Sunday.

Today I slept in and then went downstairs for an easy breakfast. I still cannot get over how good the bread is here. After breakfast I hopped in the car and drove all over Osnabrück to try and figure out where everything is. Found a really pretty old house on the side of the hill overlooking all of Osnabrück. Drove by the main Bahn station (train station) as well as the VW plant. Unfortunately I found out that I missed the football match (soccer) today in Osnabrück which was against Saarbrucken. Osnabrück won the match and I saw that they are actually very good (leading their league). Definitely planning on attending some matches when they come up again.

Came back to the hotel and Skype’d with Katie and Holden after a cat nap. Watched some How I Met Your Mother in German and then walked over to a Chinese restaurant that is about a block away from the hotel. Grabbed a 6 pack of Becks and watched The Avengers.

This was the google translation so it is a little rough but gives you a good idea of what the Weihnachtsmarkt is. 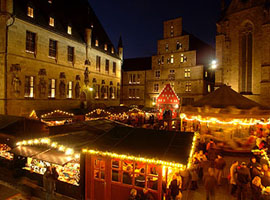 “Accompanied by the scent of freshly roasted almonds, the historic Christmas market in Osnabrück occurs from 26 November to 22 December 2012 daily from 12 to 21 clock a leisurely stroll through the market and Domvorplatz. For four weeks, visitors can convince themselves that the Osnabrück Christmas Market is one of the finest in the country, according to a survey of the NDR and a study of the World on Sunday announced.
Surrounded by the historic setting of the Old Town in Osnabrueck and the mood lighting that the Christmas market add a special flair, are located here, many stalls that offer visitors loving crafts, various Christmas goodies and lots of ideas for new gift ideas.
them the energy to every day waiting by 16 clock of St. Nicholas, a on the Advent Calendar to open another door. So the days pass until Christmas Eve very quickly. Also to admire is the greatest Christmas music box in the world, whose life-size figures since 1999 to turn on the Christmas market to the music of 25 different Christmas carols. A few meters away, visitors can expect a further attraction. Of over 6 feet tall, fully functional Nutcracker
on all four Saturdays there is the possibility to 20 clock to stroll through the shops of the center of Osnabrück, in order to get gifts for your loved ones. For a subsequent leisurely stroll through the Christmas market are again in the pedestrian zone two packet buses that provide plenty of space for your Christmas shopping.”

Yesterday I had line balancing training all morning and then started meeting with the other departments in the afternoon. Very interesting jobs and it always amazes me at how much goes into building a car. Met with Project Controlling and the Prototype departments. Dinner was at the hotel which consisted of duck, red cabbage, cranberries and apricots that were inside of a dumpling type potato roll.

Today, Friday, was a lot of reading through the numerous directives and standards that our group uses. In addition there was a couple of hours of compliance training to make sure that our trade secrets don’t get out (so don’t expect to read any on here =) ). Tonight I met with Philip at his house along with his girlfriend and her sister and husband. We walked downtown and continued the festivities at Weinachtsmarkt again. A lot of drinking and great conversation. It was a good time for me to really start trying to speak German as much as I could. Got back late around 2am and I am pretty sure after all the sugary drinks I will have a hangover in the morning. 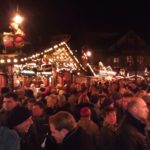 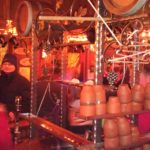 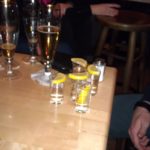 Today was another good day at work. It snowed a good bit over night so the car was covered when I woke up. Lunch was good with a pork cutlet, fried egg, skillet potatoes and onions with a pickle. Started my training program which includes meeting with all of the relevant project departments and discussing how they interface with our group.

After work I went to Weinachtsmarkt with Philip and Daniel (another co-worker that I knew from the BMW F25 launch and is the same team as me at work). Tonight I rode the bus so that I could have some more types of drinks. We tried 4/5 of the typical Weinachtsmarkt drinks. Glühwein, schokolade with baileys, another drink that they drip melted sugar into and white Glühwein. All were very good and perfect for the cold nights. While we were there it started snowing which was also very pretty. 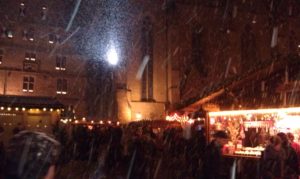 I left Greenville on Monday at 2:00 and flew to Washington Dulles. It is a huge airport and I felt like I was walking forever to my next gate. When I arrived the 777 was already there and ready to make the flight to Frankfurt Germany. Boarding was quick and easy due to the fact that my company covers the upgrade to economy plus (more legroom and earlier boarding). For some reason after everyone had boarded we were still not leaving the gate. This was due to a passenger’s pets creating an issue in the holding area of the plane and they had to be removed. After the pets were removed the owners wanted to get off the flight. I guess federal regulations requires that no luggage is allowed on board unless the owner is also on board so then we had to wait for the airline to find the pet owners luggage. Finally after a short 30 minute wait we were on our way (not too long of a wait but it later caused my luggage to miss my next connection). The flight was not too bad but as usual I was not able to sleep very well. I had a window seat and resting my head on the freezing wall wasn’t working too well. 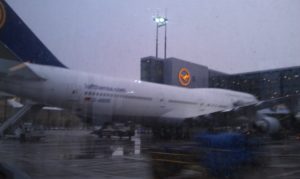 Tuesday morning we landed in Frankfurt after descending down through a snow cloud. Frankfurt airport is also very nice with a huge mall area right after security. I cleared customs with my Dutch passport (no lines for EU passports) and quickly found my next gate. After a quick hopper flight I was in FMO (Flughafen Münster Osnabrück). Due to the prior delay issue with the animals and the owners and their luggage, my luggage did not make it to the plane during the shorter layover. I filled out some paperwork and hoped that it was only in Frankfurt and not still somewhere like Greenville, SC. Luckily I packed some extra clothes in my carry-on. I picked up the car (VW Touran – almost like a minivan looking car so not the most glamorous) and headed to work in Dielingen.

I arrived at work shortly before lunch. I checked some email  and started to get acclimated to my new surroundings since my new boss was still on the way back from a skiing trip to the alps and was not expecting me until Wednesday. For lunch I had a large meatball (no sauce) with pommes frites and apfelsaftschorle. The rest of the day was filled with meeting new co-workers and getting set up with my new job.

That night I checked into the hotel where my bags were waiting for me! Shortly after, I met up with Philip (a good friend who was an intern at ZF Duncan the same time I was and also flew across the Atlantic to come to our wedding) and we went to Historischer Weihnachtsmarkt Osnabrück (Christmas Market). It is a ton of Christmas vendors and decorations all throughout the city of Osnabrück. It is best known for Glühwein which is a warm wine with spices. Very good for the cold nights. Afterwards we went to a Tapas Restaurant and I got the meat platter with Chorizo, some other meats, Olives, Bread and Cheese. Everything was delicious. After I returned to the hotel and promptly fell to sleep. 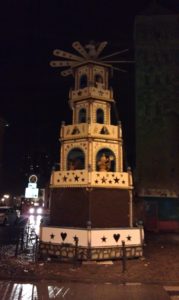 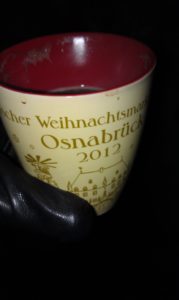